Action Pack lies at the heart of Rails applications. It consists of three Ruby modules: 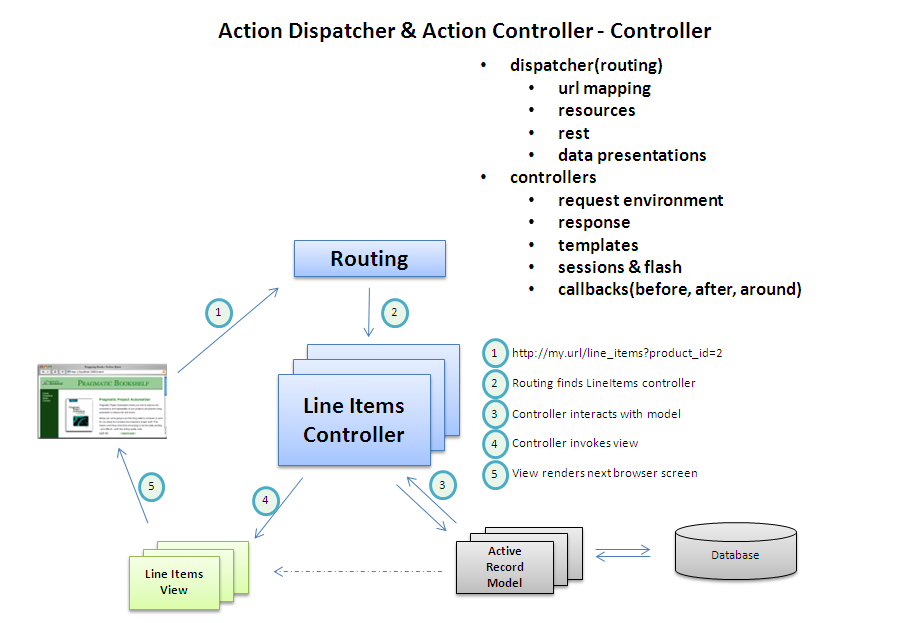 At its simplest, a web application accepts an incoming request from a browser, processes it, and sends a response.

Rails provides two ways to define how to route a request:

In a REST approach, servers communicate with clients using stateless connections. All the information about the state of the interaction between the two is encoded into the requests and responses between them. Long-term state is kept on the server as a set of identifiable resources. Clients access these resources using a well-defined (and severely constrained) set of resource identifiers(URLs in our context). REST distinguishes the content of resources from the presentation of that content. REST is designed to support highly scalable computing while constraining application architectures to be decoupled by nature.

In REST, we use a simple set of verbs to operate on a rich set of nouns. If we’re using HTTP, the verbs correspond to HTTP methods (GET, PUT, PATCH, POST, and DELETE, typically). The nouns are the resources in our application. We name those resources using URLs.

Run rake routes to take a look at the routes:

The same seven methods will be required for all resource-based routes: 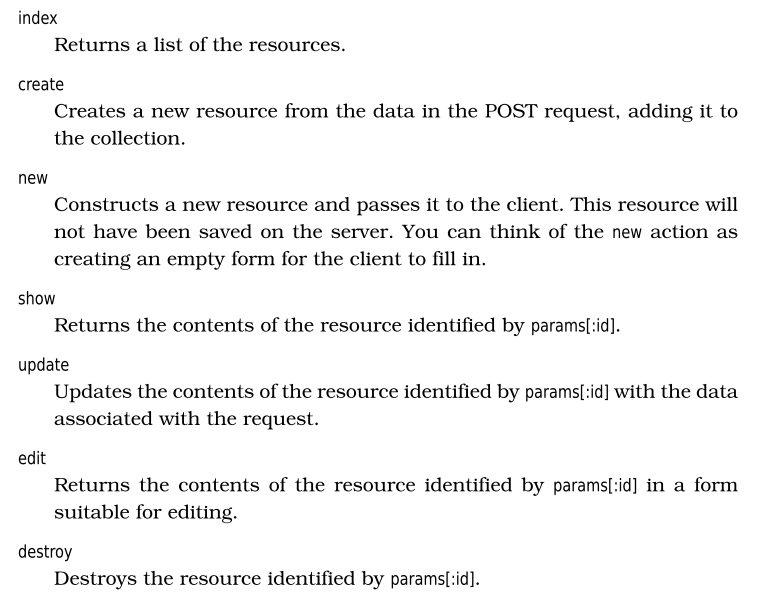 When a controller object processes a request, it looks for a public instance method with the same name as the incoming action. If it finds one, that method is invoked. If it doesn’t find one and the controller implements method_missing(), that method is called, passing in the action name as the first parameter and an empty argument list as the second. If no method can be called, the controller looks for a template named after the current controller and action. If found, this template is rendered directly. If none of these things happens, an AbstractController::ActionNotFound error is generated.

The controller sets up the environment for actions (and, by extension, for the views that they invoke). Many of these methods provide direct access to infor- mation contained in the URL or request. 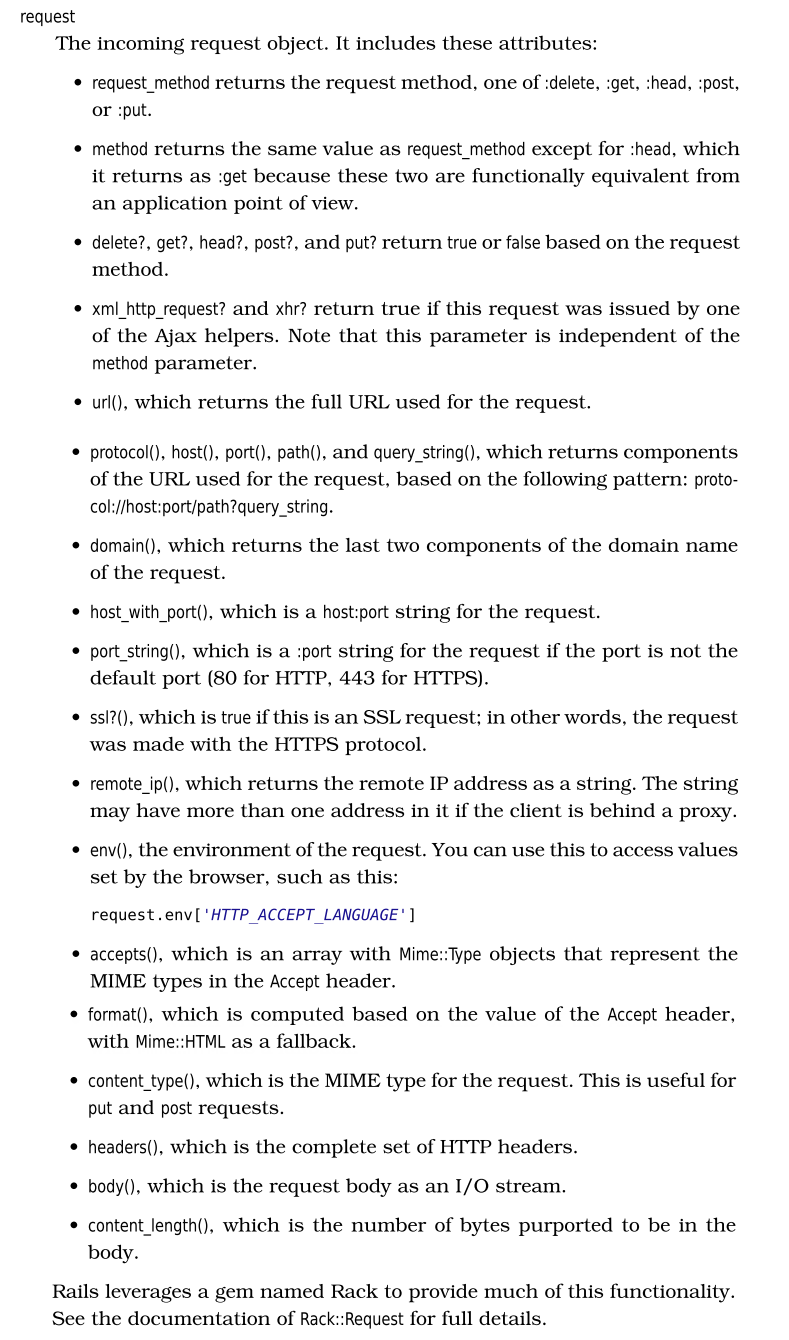 Responding to the User

Part of the controller’s job is to respond to the user. There are basically four ways of doing this:

A controller always responds to the user exactly one time per request. This means that you should have just one call to a render(), redirect_to(), or send_xxx () method in the processing of any request. (A DoubleRenderError exception is thrown on the second render.)

A template is a file that defines the content of a response for our application. Rails supports three template formats out of the box:

render(), redirect_to(), or send_xxx () methods in the processing of any request:

Objects and Operations That Span Requests

Sessions can hold any objects, which makes them ideal for holding state information in web applications.

Rails has a number of options when it comes to storing your session data: 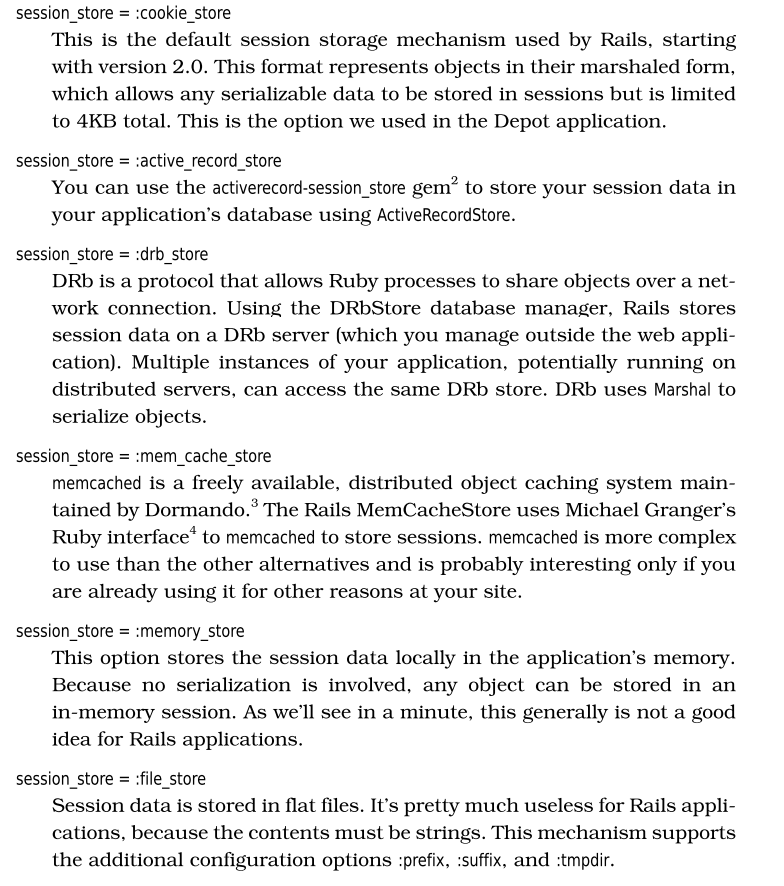 When we use redirect_to() to transfer control to another action, the browser generates a separate request to invoke that action. That request will be handled by our application in a fresh instance of a controller object—instance variables that were set in the original action are not available to the code handling the redirected action. But sometimes we need to communicate between these two instances. We can do this using a facility called the flash. The flash is a temporary scratchpad for values. It is organized like a hash and stored in the session data, so you can store values associated with keys and later retrieve them. It has one special property. By default, values stored into the flash during the processing of a request will be available during the processing of the immediately following request. Once that second request has been processed, those values are removed from the flash.

The flash is a temporary scratchpad for values:

This turns out to be a powerful facility. Using callbacks,we can implement authentication schemes, logging, response compression, and even response customization. 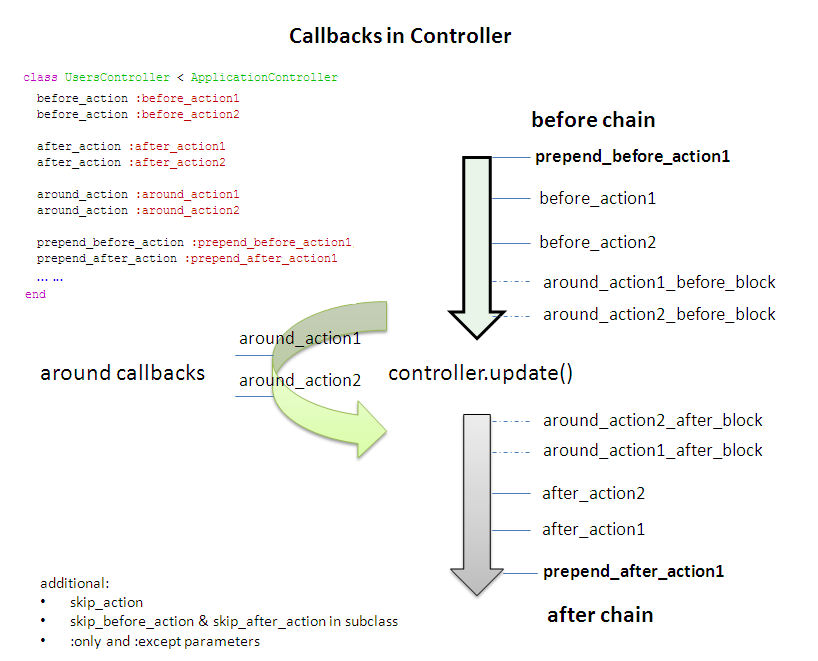