Active Record is the object-relational mapping (ORM) layer supplied with Rails. It is the part of Rails that implements your application’s model.

Active Record as the Model in MVC: 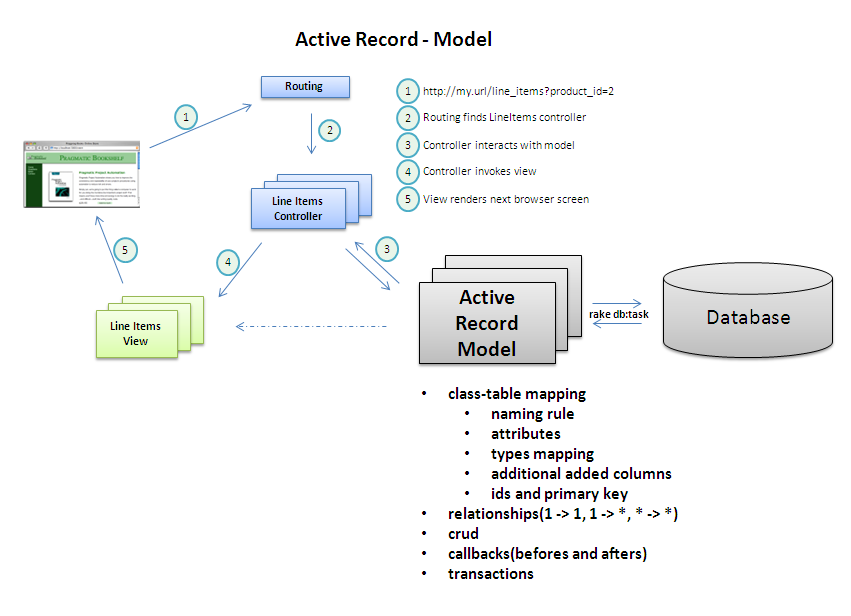 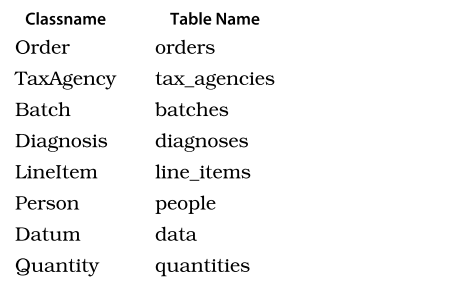 Although Rails handles most irregular plurals correctly, occasionally you may stumble across one that is not handled correctly. You have two options now:

Active Record blurs that distinction(strict boundaries between code and schema), and no other place is that more apparent than in the lack of explicit attribute definitions in the model.

rails console(list the columns, and play with the model)

Where Are Our Attributes?

The notion of a database administrator (DBA) as a separate role from programmer has led some developers to see strict boundaries between code and schema. Active Record blurs that distinction, and no other place is that more apparent than in the lack of explicit attribute definitions in the model.

But fear not. Practice has shown that it makes little difference whether we’re looking at a database schema, a separate XML mapping file, or inline attributes in the model. The composite view is similar to the separations already happening in the Model- View-Control pattern—just on a smaller scale.

Once the discomfort of treating the table schema as part of the model definition has dissipated, you’ll start to realize the benefits of keeping DRY. When you need to add an attribute to the model, you simply have to create a new migration and reload the application.

Taking the “build” step out of schema evolution makes it just as agile as the rest of the code. It becomes much easier to start with a small schema and extend and change it as needed.

A number of column names have special significance to Active Record. Here’s a summary:

Additional plugins, such as acts_as_list, may define additional columns.

Both primary keys and foreign keys play a vital role in database operations. Here’s a summary:

Active Record supports three types of relationship between tables: one-to-one, one-to-many, and many-to-many. You indicate these relationships by adding declarations to your models: has_one, has_many, belongs_to, and the wonderfully named has_and_belongs_to_many.

The new() constructor creates a new Order object in memory; we have to remember to save it to the database at some point. Active Record has a convenience method, create(), that both instantiates the model object and stores it into the database.

save, save!, create, and create! The variants differ in the way they report errors:

If you have an Active Record object (perhaps representing a row from our orders table), you can write it to the database by calling its save() method. If this object had previously been read from the database, this save will update the existing row; otherwise, the save will insert a new row.

delete() takes a single id or an array of ids and deletes the corresponding row(s) in the underlying table, while delete_all() * delete rows matching a given condition (or all rows if no condition is specified).

destroy() instance method deletes from the database the row corresponding to a particular model object. It then freezes the contents of that object, preventing future changes to the attributes.

destroy() (which takes an id or an array of ids) and destroy_all() (which takes a condition). Both methods read the corresponding rows in the database table into model objects and call the instance-level destroy() method of those objects. Neither method returns any- thing meaningful.

Why do we need both the delete and destroy class methods? The delete methods bypass the various Active Record callback and validation functions, while the destroy methods ensure that they are all invoked. In general, it is better to use the destroy methods if you want to ensure that your database is consistent according to the business rules defined in your model classes.

Participating in the Monitoring Process(Callback)

Active Record controls the life cycle of model objects—it creates them, monitors them as they are modified, saves and updates them, and watches sadly as they are destroyed. Using callbacks, Active Record lets our code participate in this monitoring process. We can write code that gets invoked at any significant event in the life of an object. With these callbacks we can perform complex validation, map column values as they pass in and out of the database, and even prevent certain operations from completing.

Active Record defines sixteen callbacks. Fourteen of these form before/after pairs and bracket some operation on an Active Record object. 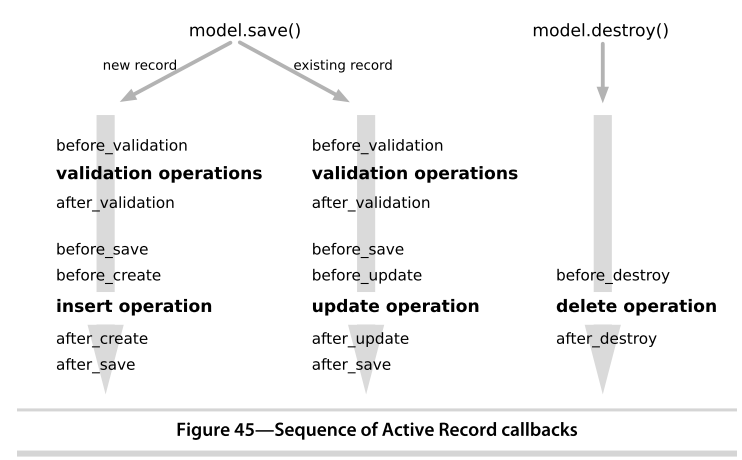 Grouping Related Callbacks Together. To have your code execute during a callback, you need to write a handler and associate it with the appropriate callback. There are two basic ways of implementing callbacks:

If you have a group of related callbacks, it may be convenient to group them into a separate handler class. These handlers can be shared between multiple models. A handler class is simply a class that defines callback methods (before_save(), after_create(), and so on). Create the source files for these handler classes in app/models.

Transactions are actually very subtle. They exhibit the so-called ACID properties: they’re Atomic, they ensure Consistency, they work in Isolation, and their effects are Durable (they are made permanent when the transaction is committed). It’s worth finding a good database book and reading up on transactions if you plan to take a database application live.

A database transaction groups a series of changes together in such a way that either the database applies all of the changes or it applies none of the changes.

Transactions to the rescue. A transaction is something like the Three Muske-teers with their motto “All for one and one for all.” Within the scope of a transaction, either every SQL statement succeeds or they all have no effect. Putting that another way, if any statement fails, the entire transaction has no effect on the database.

Active Record uses transaction() method to execute a block in the context of a particular database transaction:

Active Record wasn’t keeping track of the before and after states of the various objects—in fact it couldn’t, because it had no easy way of knowing just which models were involved in the transactions.

Active Record is smart enough to wrap all the updates and inserts related to a particular save() (and also the deletes related to a destroy()) in a transaction; either they all succeed or no data is written permanently to the database. You need explicit transactions only when you manage multiple SQL statements yourself.